A Tempest Takes Its Toll - Chapter 2 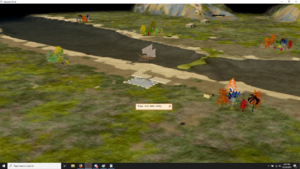 Accompanying story... Chapter 1 - For Better or For Worse, In Sickness and In Health

Player Tales and Recollections of Times Past

The Road to Now: Part 1: In the Beginning

All cultures have their origin myths that are recalled around the campfires to remind ourselves of who we are and what is important. Our earliest beginnings are shrouded by time, imperfectly recorded and memories waver. Much remains unclear.

Who amongst us now weave stories of the first Telling, where Khephry brought technologies that caused pollution and depleted resources, forcing us to take greater care of our environment and pursuing personal agendas to the detriment of others? Once bitten, twice shy!

Around desert campfires, who still remembers the Persian thief Malaki of the second telling, who traded worthless junk for valuables and sought to defame virtue? Beware the thief in the night!

And what about the story of those mysterious chests that washed up along the Nile in the third Telling that brought Lung Spore Disease to our shores, crippling our health while we frantically searched for a cure. Grimly prophetic, that one, in hindsight. Have we learnt anything at all, I wonder? And Geodude, at war with the world with a Woodplane and words of terror and derision. What more can I say? A story to recount to wide eyed children on the night when forgotten things emerge from the darkness to haunt us. Begone! And against all these things we have prevailed and prospered, after a fashion.

The Road to Now: Part II Choices and Consequences

The fourth Tale opened with the death of the Pharaoh. His two sons, Sami (eldest) and Wahim (the younger) were required by custom to agree who would ascend to the Throne of Egypt. Neither son was prepared to trust Egypt to the other.

Sami wanted to share his father's wealth with the people, and sought to win their support with gifts, contests and events with exotic goods awarded to the champions and to all participants in the revelry. Wahim refused to buy favour, but wanted to improve the people's enjoyment of everyday life. So, while Sami lavished the people with things, Wahim stirred trouble by introducing new ideas and challenging different ways of thinking. Wahim's challenges or 'tests' often encouraged crafting and introduced new capabilities and technology.

Eventually, the brothers agreed to hold a vote to determine who would ascend as Pharaoh. Sami promised that if he won, then he would require his scientists to research new skills and technologies, but all monuments completed in honour of the seven worthy test disciplines introduced by Wahim would not be passed on to the next generation. Should Wahim ascend, then the Monument Tests would become part of the next tale, but the technologies and skills created by the players will be forgotten and will need to be researched in each subsequent generation. The people of Egypt decided to support Sami as Pharaoh, and we bear the legacy to this day.

Despite Sami's intention to invalidate the monuments and their embedded test proposals, the people, with some heckling from The Stranger, managed to complete four new Monuments and four new Tests were proposed by Egypt's Oracles. Although some took several tales to be implemented, they are now part of our rich tradition. The Test of Isis's Bounty enables exploration of Egypt's seas and waterways in sea-going ships. The Throne of the Pharaoh challenge requires teams to work together to produce elaborately decorated thrones, showing off Egypt's craftsmanship.

Others proved less pleasing to the populace over time, and have been left discarded in the sands. What happened to Wahim? A strategic retreat to the deep desert was his fate. Do we now know him as The Stranger?

The road to Now: Part IV Almost there

In Tale 7 The Stranger returned as an agent of chaos, seeking to incite civil unrest and destabilise loyality to Pharoah. The ledgers of the scribes recorded this exchange, carefully restored from ancient scrolls:

"I see the Pharaoh has begun his unreasonable demands of you. Are you blind to his hypocrisy? Do you not see how his Universities exist only to fill his pockets with the fruits of your labour? Fools! He extorts the very sweat from your brow. Your ancestors knew me as The Stranger. You thought me dead. You should have known better, I am as immortal as Pharaoh himself."

'In the time of the ancestors, Pharaoh asked me to set 49 challenges to improve your vigour and skill and to prove your worth and loyalty. In this age I come without permission or request. As I gaze upon your feeble efforts I can see you are not worthy of my tests. Prove to me that your society is WORTHY to be tested!'

"First, a proof of my power. <The Stranger snaps his finger and all Egypt's Chariot Stops crumble into dust> "

"Are you truly a society with potential for greatness? Show me now! Gather 1777 cuttable stones, drawn from the lands that you claim to respect. Your time is short. Give your contributions to my representatives at the broken chariot stops before 3 hours is up. Fail me, and you have failed yourselves and all posterity."

How far we have come!