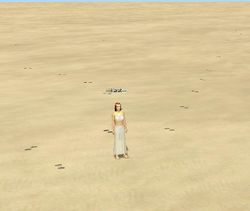 University Text: Fast-moving Desert Rats blend perfectly with Egypt's terrain, but their distinctive tracks will lead to them every time. Be aware that the wind will cover up tracks over time.

Desert Rats cannot be seen in Egypt, only their footprints are seen.

Desert Rats can be found on grass as well as sand. To help see their tracks on sand, turn down time of day lighting and turn up shadows.

IMPORTANT NOTE: You can ONLY see the tracks if you have shadows ON. Check your settings by clicking on yourself (or press Esc), then to Options, then to Video. Set it at to at least the 2nd tick to see the tracks!

Note: There is no physical item received when a Desert Rat is caught. They take up no space, weigh nothing and cannot be dropped.

To catch a rat in your trap, you first need to follow the tracks in the direction of travel. Look closely at a track and you'll see toe prints on one end of the track. Using a very close-up single F8 camera view and lowering your texture resolution (click yourself/Utility/Options: Video) can be very helpful in seeing the details of the tracks.

Once you know which way the rat is traveling, continue to follow the tracks until they end. There can be fairly large gaps between tracks, so scan a good-sized area for further tracks.

Also, rats can double back and go in circles. The toe prints can help you understand the path of travel when tracks criss-cross or do other confusing things.

Once you think you've found the forward-most track, set your trap in front of it. If that was the most recently made track, you should catch a rat. If you don't catch one, scan further ahead for more tracks while your END timer runs down.

Build the trap using your menu: Projects | Tests | Tests of the Safari | Set up a Desert Rat Trap. It helps to pin the menu when you start tracking.

Note: These are not normal buildings: they don't appear on the ground and they don't last more than an instant. Either they catch the rat immediately, or they don't. The materials are NOT consumed if you fail to catch the rat.