Tokens of Ra are a rare object awarded to the faction that wins the bidding war for that region's control for the week, for some regions. It can occur much as bonuses like +3 Flax and +1 Wood can occur, randomly, for some regions each week. The Token is deposited at the Great Hall of the faction that won the bidding war for that region when Tribute is evaluated for the week, and can be picked up by anyone of that faction who is not on a Token of (Faction) or Token of Ra taking cooldown. A message is noted in the faction information channel, indicating that regional leaders of (Region) have provided gifts to our Great Hall.

No faction rank is required to take the Token of Ra from the great hall, but like taking a Token of (Faction), it places you on a cooldown before you can retrieve another Token, whether of Ra or of (Faction), from the Great Hall.

There are presently three known uses of Tokens of Ra intended, and one likely to be discouraged by faction leaders. 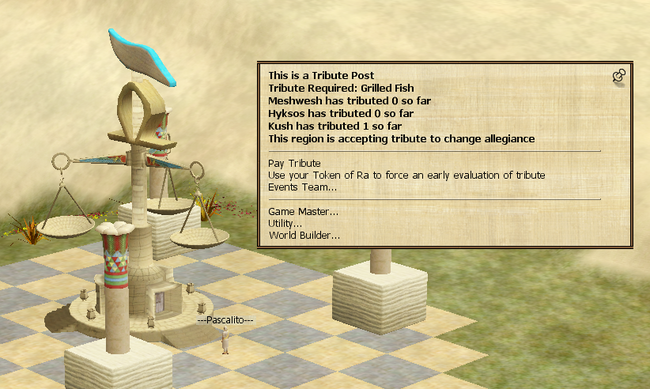 2. At a University of Progress:

A Token of Ra can be used to bypass the timer to demonstrate a test, should the University still be on the one-week RL Ducktime cooldown since the last Test was opened at the University of Progress. It does *not* remove the requirement to bring the materials, the players, or any other demonstration requirement needed to unlock a Test.

3. At a University (or, presumably, Great Hall for those techs):

A Token of Ra can be used to immediately bypass the research timer for a single technology. Tokens of (Faction) may be spent to shorten it, but Tokens of Ra immediately make the technology available to learn regardless of how long the timer is.

4. At an Offering Vault

Tokens of Ra are rare and somewhat useful! Not many people will put them in a vault, so good points if nobody else had the same bright idea and managed to obtain a Ra that week. This is likely to be discouraged by faction leaders, due to the usefulness of the Tokens for resolving minor to moderate diplomatic crises and returning regions to the faction's control if they were lost due to oversight or bug.