Vigilant Visions is a Guild created for the purpose of running regular and successful Vigils. This guild has a long and vibrant past dating all the way back to Tale 2, and held the record for the longest Vigil held during that Tale, at 27 hours. Current Elders for VV are Nekojin and Snoerr. Please contact them if you have any questions this page doesn't answer.

Vigils are, unfortunately, greedy and hungry Tests that will consume a great many resources of Egypt. That said, the rewards we can gain from participation are not trivial. 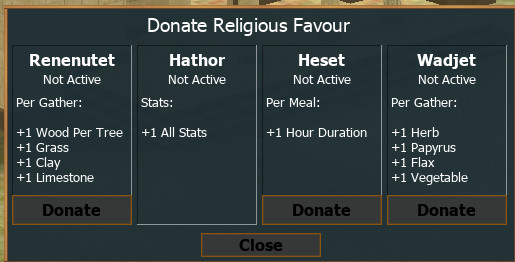 We hope to keep both the Renenutet and Wadjet boosts running frequently - at a minimum, for all weekends, and if possible, constantly.

As mentioned before, Vigil is a greedy Test. We will need a large number of virtually all materials in the game. That said, the first Vigil that was held this Tale turned out to be exclusively vegetables. Out of 261 items requested by the Sacred Bonfire, 259 of them were either vegetables or veggie seeds, with the remaining two being sheep.

We're going to want to have a minimum stock for our stores, but until we've had a few Vigils to give us an idea of what's going on, we're flying blind, so we want some of pretty much everything, but especially seeds and veggies. If you have supplies that you can spare, please come donate them!

Vigilant Visions is going to be slowing down to Vigils every 3-4 weeks at this point, as the added Collection bonuses from the Pyramids makes the Favour boosts less useful. But we know some people will still need a community Vigil to pass the Test, and the Favour boosts are still useful... just less so.

How we run Vigils

Unlike super-casual Vigils, where people volunteer for sacrifices that they have materials for, the Vigilant Visions ideal is to make a more orderly Vigil, with participants donating materials they can afford and/or easily make, and the Vigil Guild handing over the materials to the person whose turn it is, in a rotation. We have a Caller (usually Andara) who will call out the next sacrifice when the Vigil does, assign it to the next person in the rotation, and add that information to the spreadsheet for the Vigil. Whoever is working on a materials management role will give the requested materials to the person assigned for the sac, if the warehouses have it. People who are staying for more than one sacrifice are encouraged to gather materials until it's their turn in the rotation, while people coming in for just one sacrifice to pass the Test are inserted to minimize their wait and let them get on with their day.

Some people view this as needlessly structured or demanding, and prefer the casual Vigils. That's fine, there's not really one "right" way to do Vigils. But this is the strategy we've been using since Tale 2, and on many occasions has resulted in people passing Vigil on the very next pass cycle after the Vigil ended (AKA One-Vigil Passes). Note that Vigils are far less demanding for a Pass this time around, but we still want to get as many points for the Boosts as we can manage, because it benefits all of Egypt.

What should I bring?

If you just want to do one Sacrifice to pass the Test and be done with it, then it would be appreciated if you'd bring something that is easy for you to make - 100 of wood, flax, papyrus, limestone, and so on. You'll donate those to the VV stockpile, we'll get you a Sacrifice early, and you can get on with your day.

If you intend to stick around and earn Worship points for the Boosts, then just bring yourself and whatever tools you typically use - a shovel for a Dig, your scythe and basket for grass collection, and so on. You may be assigned to work on a material collection process during the Vigil.

Either way, let us know you're coming and whether you intend to stay. That makes it easier for us to plan.

We also do wines!