Build a shrine to the god of your choice, along with four others. Summon and bless the shrine at will - the more original priests present, the greater the shrine's power. 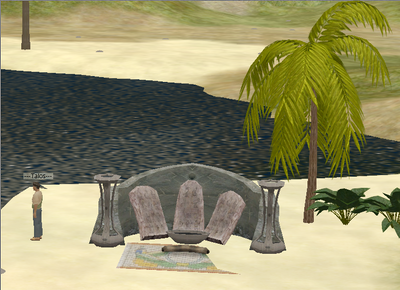 Build a shrine to one of five gods, along with four other priests. The shrine may be called forth at any time, and the shrine's power is equal to the number of owning priests present at the time. Performing blessings increases the holyness of both your shrine and of the shrine blessed.

Principles of the Holy Shrine

Build a shrine to one of five gods, along with four other priests. The shrine may be called forth at any time, and the shrine's power is equal to the number of owning priests present at the time. Performing blessings increases the holyness of both your shrine and the shrine blessed.

The Test of the Holy Shrine is the tenth test in the discipline of Worship.

This Test is from the Kemet (German Tale 1) Worship Monument.
The original design for the test can be found here, though there may be some changes from the initial plan.

Creating a Group of Priests

Once the shrine has been built, other players may click on it to ask to become one of the priests for the shrine (set the shrine 'Usable to Anyone' if the option is not available). When four additional players have been accepted, the shrine becomes active. God list for forming Holy Shrine groups found here.

Shrines that have been built here.

[It is assumed, but not confirmed, that priests that have the shrine's god as one of their randomly assigned 5 gods are eligible. Nothing on the shrine appears to indicate which god the shrine is for, though the builder should know which one was selected.]

System...09-06-2005-17:18 Pluribus Here... Since there seems to be confusion, I should state that Abandoning your Holy Shrine is JUST like Abandoning your pilgrimage group, it disbands the sect and DESTROYS YOUR SHRINE.

The shrine is not fixed in location. Any of a shrine's priests may meditate to summon the shrine using the player menu: Tests... > Test of the Holy Shrine ... > Meditate to summon your Shrine. The shrine will appear. It will have a "power" corresponding to the number of that shrine's priests who are present when it is summoned. For example, if two priests are present, it will have "double power", if three, "triple power", etc., which affects scoring. The power of a shrine and it's accumulated score can be seen in the menu that appears when you click on it.

A summoned shrine will disappear after a period of time. How long is not yet confirmed.

(Once the shrine is summoned, any priests not doing blessings can leave without affecting the shrine's power.)

It takes two players to bless a shrine. These two players must each be a priest at some shrine (the shrine in question or a different one) to be able to bless.

Blessing is performed two players each doing an emote. When clicking on the shrine, there will be a menu item for "Bless this shrine ...". (If not, it probably means the player has not signed up for the test.) A sub-menu gives five emotes as options to bless the shrine:

One player chooses an emote, then the second player does the same. A message in Main will tell you if the combination was complementary (i.e. whether it was accepted). Players will have to experment to find the right combination to complete the blessing.

When a pair of players has successfully completed a blessing, each of them will not be eligible to perform another blessing for a period of time. [undetermined at this point... one day?]

A particular pair of players can only bless a particular shrine once. For further blessings at a shrine, different pairs have to be formed.

When a blessing is completed the shrine where the blessing was performed receives 2 points, multiplied by the "power" of the shrine. In addition, the shrine(s) of the players performing the blessing receive(s) one point (not multiplied).

A shrine with all it's 5 priests present during blessing receives 11 points when is blessed by 2 priests that belong to the shrine and 6 points if one of the priests doesn't belog to the shrine. So, with the 5 priests and 1 invited priest it can get 11+11+6=28 points. The invited priest doesn't need to have the god of the shrine, but has to be associated to another shrine (even if that shrine hasn't been activated).

For example: A group of 6 "holy shrine" priests gather at a shrine. 3 are priests of that shrine, 3 are not. The power of the shrine is 3.

The Shrine and its priests with the highest score pass on the Sunday Passes, an example from T3...

Please verify these answers, if you have specific information.