Work in a group of 7 people to visit pilgrim shrines built by others in Egypt. 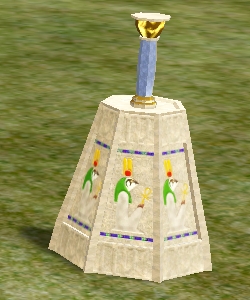 Next, visit as many holy pilgrim shrines as possible, making the requested donation to each.

Shrines must be at least 10 minutes apart, but a given shrine can be visited repeatedly.

About once per 7 realtime days, the group with the longest pilgrimage is promoted.

Principles of the Pilgrim will guide you through establishing a Pilgrimage group, and making your first Tithe.

This building becomes available after you have learned the Pilgrim Shrine Construction skill from a School of Body.

Pilgrim Shrines are built by players for Path of the Pilgrim. Each shrine has a tithe associated with it, set by the builder. This tithe may be any quantity of any single item.

A shrine costs seven marble to construct, plus seven times the tithe. The type of marble required will vary with the type of the tithe (you are informed of the type needed when you attempt to construct the shrine using a small construction site). There is a list of Pilgrim shrine requirements.

It is not possible to transfer ownership of a shrine to a guild or other player. The builder must have the Pilgrim Shrine Construction skill, available at a School of Worship for 1 piece each of Oyster Shell Marble, Mud Granite, and Yellow Alabaster marbles and have started the test.

Tithes made to a shrine are collectible (instantly) by the builder of the shrine, so a well placed and priced shrine may collect a significant amount of tithes.

Pilgrims may only tithe at a shrine if it is holy and is at least 600 coords from any other shrine the group has tithed at.

A shrine is holy if:

For the purposes of this Test, Egypt is divided into 8 regions.

It is usually best to build a pilgrim shrine at least 600 coordinates from any other shrine. If you build within 600 coords of another shrine, a pilgrimage can only visit one of the shrines (so you potentially deprive yourself or the other person of some shrine income, and the pilgrimage of the chance to tithe at two shrines instead of one). It is also unwise to use the same resource for a tithe as someone else in the region since this will make their shrine non-holy and useless - this has caused expensive shrine wars in the past.

Tool for measuring the distance between sets of coordinates: 2D Distance Calculator

Note: If you salvage your Pilgrim shrine, you get nothing back.

This is the second test in the discipline of Body. You're required to form a group with six other people. Each of you must tithe at two different shrines. All seven members of the pilgrimage must tithe within two minutes of each other—otherwise the points are not counted (see locations and items to tithe below). Make sure the Pilgrim Shrines you tithe at are holy. (see below)

A pilgrimage consists of exactly seven people. The leader should visit a University of Body to form a group. The other six members must also visit a University to begin the test; once they have done so, they may select an option from the leader's menu to join the group.

Once formed, a pilgrimage may not change its membership. If any member dissolves the group (self->Tests menu), all points are lost and the members will need to start the test over from the beginning. Points are not lost if a member quits the game, but no more may be gained unless all seven members are available (quit players can pass this Test).

Once formed, the pilgrimage must tithe at Pilgrim Shrines. The amount and type of the tithe is set by the builder of the shrine. In order to successfully tithe:

The shrine must be holy (see #Pilgrim Shrines, below). All seven members of the pilgrimage must tithe within two minutes of each other—otherwise the points are not counted. Each Shrine can only be tithed once before you have to tithe at a different shrine. Attempting to do the same shrine a second time produces a dialog box "You have already tithed on this shrine. You must tithe at another shrine before returning here."

Logging off one character and onto a spouse/other does not affect the tithing, as long as both tithe within the timer.

The shrine must be at least 600 coordinates (measured, not region based) from any other shrine this group has tithed at. 600 coordinates takes 10 minutes to run, at 0 dex, offroad.

The pilgrimage will receive 100 points for successfully tithing at a new shrine. It is possible to tithe multiple times at the same shrine, provided you visit another shrine between each additional tithe, however the points received will halve with each successive tithe. The following chart shows how many points per tithe.

NOTE: The points for each shrine and the total number of points are all actually floats, which are rounded to ints for display. The number of points obtained for each tithe is exactly half of the preceding one. At one point our pilgrimage had 200 points for two different shrines but our total was 399.

Pilgrims may check their progress from their Tests menu, which will report the current total score of the pilgrimage, as well as what shrines have been tithed at and how many points were received from each.

Every week, the pilgrimage with the largest number of points will pass the test. Pilgrimages that do not pass in a given week retain their points, and may either continue visiting new shrines to increase their score or wait and hope their existing total will be enough in an upcoming week.

Please also update the map at the bottom with your location.