Thwart future generations of grave robbers by constructing puzzles to lock away our treasures and secrets. 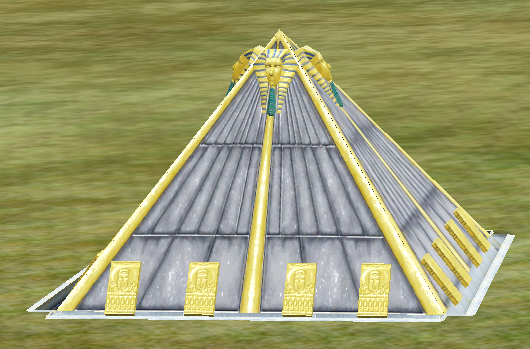 You learn to construct Tombs of the Immortal, puzzles designed to thwart future generation grave robbers from plundering our treasures and secrets. By honing our skills, by challenging each other to solve and fortify these puzzles, our legacy may live.

The task of Tomb of the Immortal guides you through the creation of your Tomb, until you open it for judging.

This is the fifth test in the discipline of Thought.

The Test of the Tomb of the Immortal challenges you to build a sliding block puzzle that your fellow Egyptians will find enjoyable to play.

The tomb consists of a rectangular board with a maximum size of 8x8. In it are multiple coffins of length two or three, and at least one sarcophagus also of length two or three. Each of these pieces can be moved lengthwise by clicking on the end of it opposite the direction you want it to move, and if there is no other piece blocking it (example: to slide a coffin to the right, you would click on its left end to "push" it right).

There will be one or more openings along the walls which you can slide either coffins or sarcophagi out of and permanently remove them from the board. The goal of the puzzle is to remove all sarcophagi from the board.

Each week, the two highest-rated puzzles will pass.

Tomb of the Immortal Locations

Just adding to the table doesn't add to the map, you need to add the above line to the CondMap with the others

Tomb of the Immortal Map