Carving is a multi-level self-taught skill. In order to Carve an object, you must have a Knife equipped. Higher levels of Carving allow construction of higher level blades and carving additional items and will decrease the focus timer incurred when performing carving tasks. 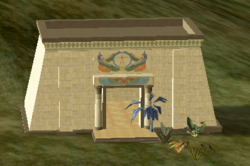 Carving is a multi-level skill taught at the School of Body.

This system is actively under development and refinement. As such, some options or functions may not currently be in working order.

In July 2018, an entirely new carving and knife system was introduced, replacing the previous system. Knives have new names and capabilities and some knives can be sharpened.

Old, pre-system-change Knives are still usable. Un-assembled Iron Knife Blades currently can not be made into anything - a fix for this is still being worked out.

Knives must now be equipped (or "wielded") for use.

Equipping a knife will remove it from your inventory and place it in your hand (silly graphic included), freeing up inventory space. The menu option to unequip the knife returns the tool to your inventory.

You can check the durability and usability of any knife. The option will open a listing of knives in your inventory.

A knife that is wielded is removed from your inventory, and can be examined through

A knife in good condition will display a message similar to:

Other messages have included:

These descriptors match what is seen in a player's carving menu. After each item that can be carved, the required knife durability is listed in parenthesis. Slaughtering of cows and pigs can fail, even if the knife is still capable of performing Advanced tasks. The task difficulty listed only seems to apply to carving wood.

Carving tasks seem to be divided into Basic, Intermediate, and Advanced.

In the old system, each carved item had both a carving skill level and minimum blade level requirement. Under the new system all items within one's carving ability can be made with any knife provided the knife is still sharp enough. As in the old system, knives have a limited number of uses before they wear out and become unusable. Higher level knives are more durable and can survive more use before wearing out or becoming dull.

The Stone Knife, Flint Knife and Bone Knife will simply break and disappear from the player's inventory when they wear out. However, the Utility Knife, Paring Knife and Butcher Knife will become dull, and can be sharpened to become usable again. Sharpening is currently free, but will eventually have a cost associated with it. Sharpening does not restore all of a knife's durability, only a large portion of it, and presumably knives will become unusably dull after too many sharpenings, though with a good-quality blade, this may take considerable time.

To sharpen a dull knife, navigate to the following menu (not visible unless you have a knife in your inventory, not wielded, which is possible to sharpen):

All knives of Utility grade or higher can be sharpened, regardless of whether the blade used to create the knife was acquired from a cache or created by a player.

When carrying multiples of the same knife, the knives at the bottom of the list are the sharpest. You can choose to equip the duller knives listed first, for carving wood and leather and save the sharper ones for slaughtering cattle and pigs.

A toolbelt to allow you to carry various tools, though not yet implemented, will eventually be craftable. The option to wield one is there, under

Carving is a multi-level skill taught at the School of Body.

Degrees of the Carving skill are now available at different player levels than before. The new levels required to learn each degree of the skill and the tuition costs are as follows:

Other skills needed for making knives