Search Egypt's waters for the remains of a fabled treasure ship "Isis' Bounty" and plunder the wrecks to learn new ship building methods.

Traverse Egypt's rivers and seas to find the remains of the lost treasure ship Isis' Bounty, Collect debris from sunken ships and bring them to the Universities of The Human Body. Return a fragment from each part of Isis' Bounty to advance.

Speed and animation are known issues. The players in a recent poll voted to release this test anyway. Complaints about these issues will be ignored.
If you get struck in an odd animation mode or speed due to a ship sinking or disembarking, select self>Emotes>Gait:Running to get out of the odd animation and restore your speed.
Eugenius reports a bug that causes sailboats to stop. Cause of this bug is unknown.

Boats can get stuck if driving up on land, try clicking once behind the boat to turn it around 180 degrees (endurance timer).

Sailing off the map, north of the 8190 Y line in the Mediterranean, can make your boat frozen, and you will need to make a GM call to get back to the playable area (can't disembark, can't nav point, boat can't move).

If you embark (enter) a boat in the middle of a fishing cast, your boat may not move when you raise the anchor. You will be stuck in the "fishing on land" state. To resolve, disembark, fish once more, and when the cast has finished you should be able to move normally, both on and off the boat. Devs are working to squash this bug.

If you disembark (leave) a boat while actively fishing, a similar bug happens. You will be stuck in the "fishing from a boat" animation. To resolve, click your avatar, Emote, Gait: Walking or Gait: Running. Devs are working to squash this bug, too!

The Test of Isis' Bounty challenges players to find pieces of that legendary ship named Isis Bounty in Egypt's waters. Pieces can be found while fishing from the shoreline, but the final pieces needed to pass will be found in the deep waters of the Mediterranean and Rea Seas. Players will have to learn to construct Small Sailboats. Small Sailboats are steerable but subject to prevailing currents and have a chance of breaking up at sea, depositing the player on a random shore. In order to learn to construct Small Sailboats, players will have to advance their Shipwright skill level. All ships are affected by currents and wind resulting in slow sea travel.

Gaining shipwright level 4, players will gain the ability to construct larger, sturdier, and more expensive ships, complete with cargo holds. In addition to finding pieces of Isis Bounty or other ships, other desirable and undesirable debris will be found. Players will also need to scour the seas for Treasure Caches, recovered with Winches, which may contain rare and plentiful booty. Players may continue to seek out even larger and rarer Treasure Caches once they have passed the test, using a Sturdy Winch installed upon their Master's Schooner.

In order to pass the Test of Isis' Bounty, players must find:

Once a player has all these in his/her possession, they should be shown to the scientists at University of the Human Body for the zap. All seven fragments will be removed from the player's inventory when they do so. Only fragments which have been found by the player attempting to pass will count.

With the introduction of this test, it became possible to fish up items other than fish. See the Fishing page for more information.

The use of pieces of Isis' Bounty is detailed below. 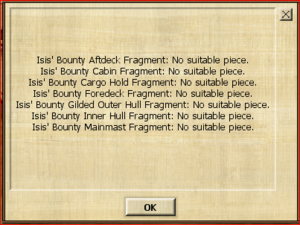 Note: If a player has an piece of Isis' Bounty in inventory it will show with the piece name, the username and the number of the piece.

Built in a Small Construction Site

Upgrading with a light winch costs: 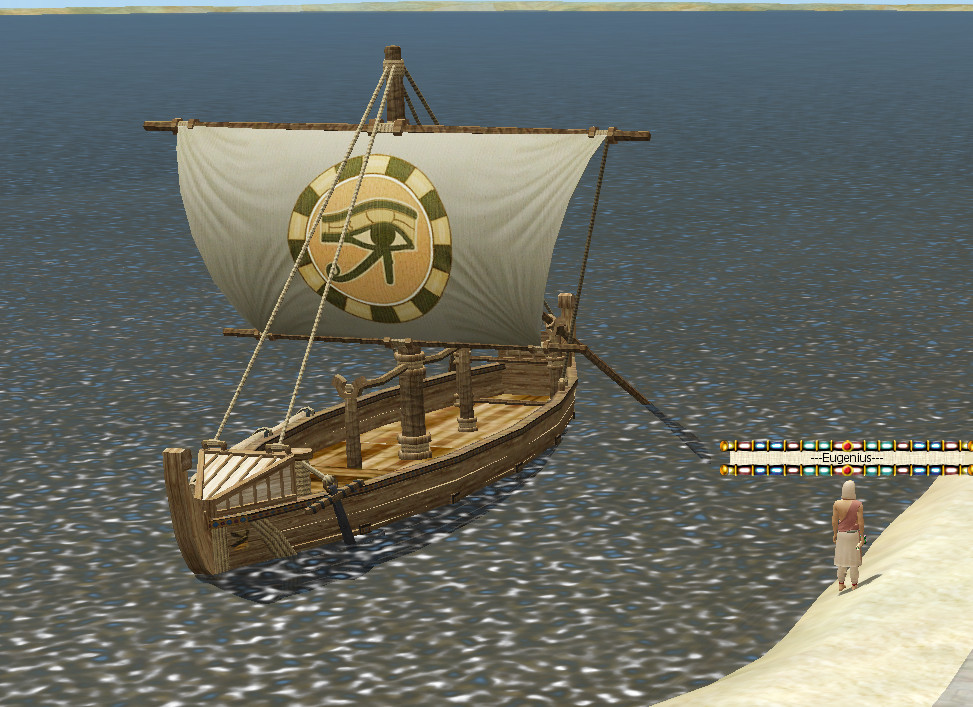 Built Outside in a Medium Construction Site. Master's Schooners obey the same mechanics as Small Sailboats (above), with a few exceptions:

The base capacity of a Master's Schooner's cargo hold is 25000 Deben.

Winches allow the recovery of Treasure Caches. Treasure caches are spotted while at sea and appear as a shimmering surrounding a dark spot and have a relatively short visible range of around 10 coords. There are a couple of methods of finding Treasure Caches; the most straightforward is just to happen upon one. It is also possible, however, to narrow down the location of a Treasure Cache using an already-found Fragment of Isis' Bounty.

Note: video -> Fountain Detail must be ON to see treasure caches while at sea.


To locate a treasure cache, player with any fragment of Isis' Bounty in their possession may examine it at any time.


The fragment does not need to be found by the player examining the fragment. It will display one of three messages:

There are two types of Treasure Caches. An "ordinary" Treasure Cache can be fished up with either a Light Winch or a Sturdy Winch. The player must be directly over the cache to haul it. It consists of an assortment of the following: