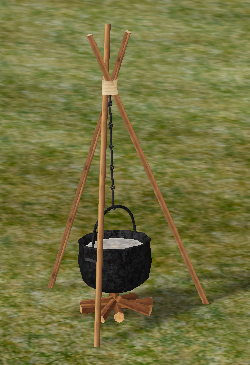 This page relates to beer as a resource and as a beverage.

See the Beer Guide for details and instructions for the brewing of beer.)

The national beverage of Egypt, Beer is brewed in a Beer Kettle using various combinations of malt, wheat and honey.

It is stored in a Small Barrel and served at a Ceremonial Tasting Table.

Beer is drunk at a Ceremonial Tasting Table, to increase Beer Tasting skill (an important route to Perception improvement)

Individual beers can vary across many characteristics, depending on the ingredients and yeasts used in their brewing:

Beer is stored in Small Barrels. A barrel of beer is very heavy, with weight 100 and bulk 1. There is no way to empty a full barrel of beer other than by using it (by unkegging it at a tasting table, or by distilling it or making it into ambrosia).

If beer stays too long in the barrel (or on the tasting table), it will eventually spoil, rendering it unfit for drinking. Beer can only go bad after it has been kegged; it can sit in the kettle indefinitely before then. The more potent a beer, the longer it will last after kegging.

You will not be told whether a beer has gone bad until you attempt to drink it. Beer will also spoil on the tasting table if left out long enough. Spoilage does not affect a beer's fitness for distilling, ambrosia making, or donating to university research.

Beer is drunk at a Ceremonial Tasting Table. Served in mugs, each barrel provides 21 servings. Click on a mug to fill it, then click on it again to drink.

Drinking beer differs from wine in two important respects. First, unlike wine glasses, all mugs are identical—there is no mug on the table that is "better" for drinking. Grab whatever you like. Mugs are provided automatically and for free; they are not individually crafted as wine glasses are.

Second, the results of a taste of beer are the same for everyone. That is, what you taste is exactly what the barrel has to offer; there is no "beer palate" to refine. (That said, multiple Beer Tasting points can be had from the same barrel—see the Beer Tasting article for discussion.)