Raeli ovens are semi-automated structures used to manufacture Raeli Tiles and gather Clay if upgraded. They are NOT actually built ON clay. It's hidden under the regular terrain.

(only available if the initial construction was successfully located on a soft clay patch)
It is possible to build two ovens very close to one another, even if the soft clay patches were identified by the same breed of pig. However, when attempting to install the dredging mechanism, you may receive the message: "As you inspect the ground below, you notice another dredging system from a nearby oven that will make it impossible to Install a dredge here." Tearing down the preexisting oven resolves this conflict (you will get back 100% of Raeli mats, but not the small construction site mats).

You can pay for a new Gear Box requirement by selecting Projects... > Commission Gearbox Refinement Project 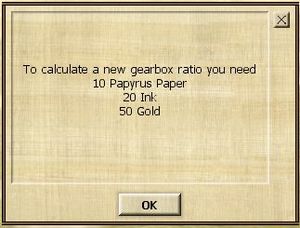 Cost to commission a new Gearbox

Raeli ovens can be upgraded to dredge clay instead of tiles. The option "Upgrade Oven with Clay Dredge" appears on the main oven menu provided you know Raeli Pottery and the oven isn't dredging or burning tiles.

To collect clay instead of tiles, requires:

Note - When dredging clay the oven will not gather tiles, you can dredge tiles or clay, not both! After the upgrade you can choose which you would like the oven to do. Clay appears to be gathered at roughly the same rate that tiles would be.

When the Raeli oven is not in operation the oven menu has the option to Strengthen the Mechanism. This upgrades the Raeli Oven to work faster. How much faster is currently unknown. The oven will only allow you to upgrade if you have learned Structure Reinforcement.

It can be upgraded up to 7 times. To build Level 3, you must have already have built Level 1 and Level 2. Level 6 would first need levels 1, then 2, then 3, then 4, then 5 before you can do level 6. Therefore, the total actual costs to reach each level is:

Warning: Ovens overloaded with more than 20k tiles will return no tiles when fired. In T10, ovens start having breaking tiles within a one-week period on a fully-upgraded oven, so expect less return on all bakings. Ovens that are not fully upgraded will dredge tiles slower, and will take longer to become overloaded.

Raeli ovens continually dredge Clay from the ground, accumulating it as unbaked Raeli Tiles. At any time the owner may start baking the accumulated tiles; this costs 25 Charcoal and halts the dredging process. Baking tiles requires the Raeli Pottery skill. All tiles must be baked together—it is not possible to bake some tiles and leave the others unbaked. It is not possible to remove unbaked tiles from an oven.

As the Raeli tiles bake, they gradually change color. All tiles begin as White and slowly cycle through a progressively darkening series of colors in 128 decrements that each vary from 10 to 120 seconds, ending up as Black. The owner of the Raeli oven may interrupt the baking process at any time to stop the tiles at a particular color. When baking, tile color is determined by written color, not the color shown in the color swatch. Once tiles have stopped baking, they cannot be re-baked later to change their color. After halting the baking process, the Raeli oven can be restarted to dredge new tiles. The exact colors that tiles pass through on their transition from White to Black depend on where the Raeli oven was built.

Starting and stopping the baking process increases your experience in Raeli Pottery according to the following progression:

In Tale 10, so far only ten experience points can be gained in Raeli Pottery.

Raeli ovens have an option to allow the owner to make the oven public, but keep a percentage of the tiles burned as a fee for the use of the oven.

So, if you set it to "Owner Keeps 10%", then the user would get 90% of the tiles sent directly into their pocket, and the owner would get 10% of whatever color is burned, kept in the oven's inventory. The default behavior is for the owner to keep everything

Normally to let a non-owner use a building you would set it to be used by "Anyone". If you set an oven to be used by Anyone, then it overrides the "Non-owner Percentage", and they would keep it all.

So, to set up an Oven to be baked and dredged by people other than the owner, you have two options:

In previous tellings, Raeli Ovens produced soot when fired, which could prevent such things as growing Flax, harvesting Fresh Leaves, and others. No pollution was reported in T7 and none is yet apparent in T8.

Region Materials: This data is from T9.

If you'd like to document the colors and information related to your own Raeli Oven, you may find the Raeli Oven template helpful.